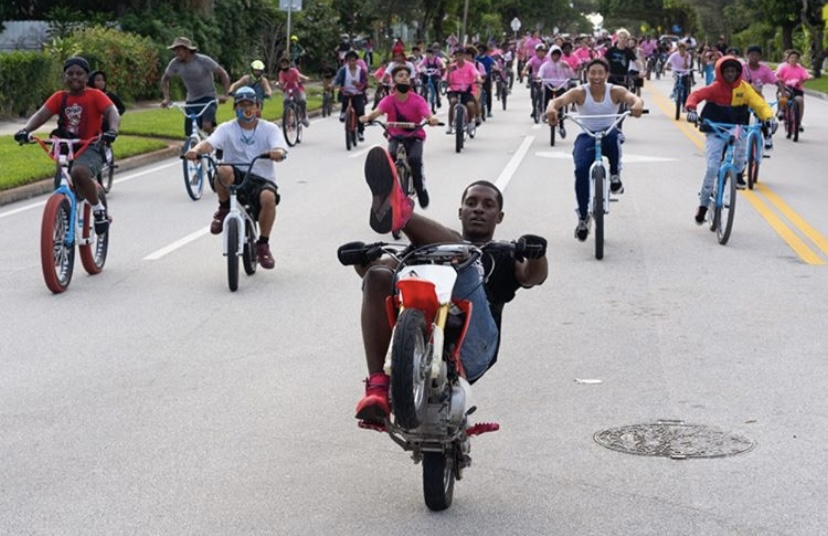 Marlon leading the pack in a mini dirt bike on the way to West Palm Beach Downtown.

Juan Gonzales is a South Broward High School junior who has found a passion for riding bikes like many other teenagers, but in a very different way. They call it “Wheelies,” which consists of riding a bike on the rear wheel.

“I started doing wheelies in 2017 when I was living in Bogota, Colombia. I was 14 at that time,” said Gonzales.

Gonzales’ life hasn’t been easy. He had to move to the U.S. since his family was struggling with an economic crisis. “When I moved to Florida in 2018, I had to start over with a new bike, so I bought a really cheap bike from Walmart,” said Gonzales.

From then I kept upgrading, until I bought a bike made of aluminum which is perfect for wheelies because it’s really lightweight,” said Gonzales.

He likes to ride by himself, but every Saturday he rides with other local riders from Hollywood in a big pack.

“We like to call ourselves a big family, we always have each other’s back,” said Gonzales.

Gonzales fell in love with the feeling of freedom doing wheelies gives him. He says it is more than just riding a bike on one wheel.

“It’s more about learning the trick, practicing, falling, getting back up, not giving up and finally succeeding,” said Gonzales. “We invent our own tricks. We compete against each other.”

They usually like to ride anywhere in the city. Gonzales said the city is their park. He admits that most of the riders have taken at least one big fall.

“Falling is part of the sport. If you don’t fall learning a new trick then you are not doing real tricks,” said Gonzales.