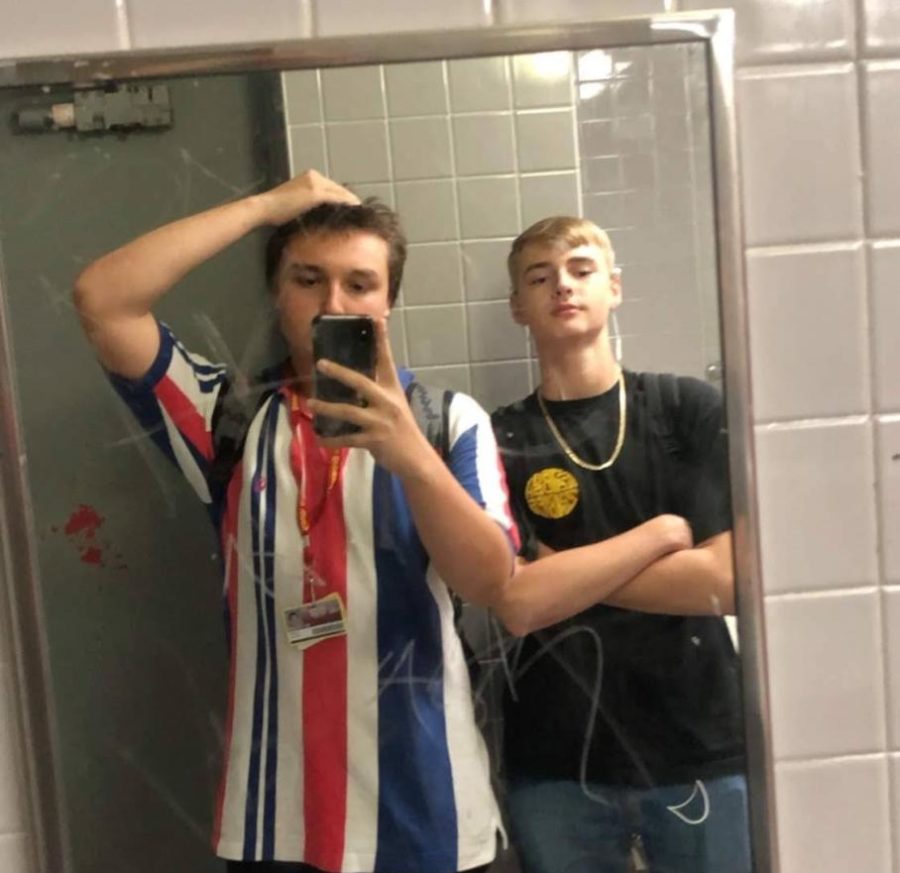 Lucas Parron uses a bathroom mirror to snap a photo of himself with Shane McVey during a break between classes.

On December 22nd, 2020, South Broward High School lost an energetic, genuine and inspirational soul when senior Shane McVey died in a motorcycle collision near his home in Hollywood Hills. He leaves behind a legacy full of love, laughs, and endless impact on others.

Shane was a dedicated student, who took a variety of AP, Honors, and AICE courses throughout his time in high school. As well, he participated in different clubs, including Debate and Student Government, where he proved to be a leader and offered support to other members day in and day out. He made some of his best friends there, including fellow SBHS senior Isaac Adelson.

“I met Shane for the first time through Ms. King’s Debate Club,” said Adelson. “He made me feel instantly welcomed and he took me in with open arms.”

Although sometimes he struggled academically, history was the one subject that captivated him.

“He loved soldiers and I really think that’s what got him into history,” said Gary McVey, Shane’s father.

His love for history is what prompted him to insist his family take a trip to the National Infantry Museum in Georgia, right next to Fort Benning.

“We took a vacation just to go travel to the museum,” said his father. “His grandparents had asked him what he wanted to do and where he wanted to go and that was all his choice”

One of the people Shane looked up to was his uncle, who served in the special forces. After he got out of the service he had moved down to Florida when Shane was young, and they got really close.

“They’d spent a lot of time together and he was always excited about that soldier aspect,” Shane’s father said. “The whole concept of history and learning, he really associated that with good relationships.”

That was evident in Shane’s relationship with his older brother, Sean.

“I would always hang out with him and talk to him about global news, politics, and current events,” said his brother.

As a toddler, Shane was dubbed “the destroyer” by his mother, Andrea McVey. And for good reason.

“He broke every piece of furniture,” said Shane’s father, Gary McVey. “All the walls were caved in.”

His dad recalls walking into his room one day and seeing LSU posters, haphazardly scotch-taped all over his wall.

“It was too specific to be random,” said his dad, recounting the story.

Knowing something wasn’t right, his dad peeled back the posters and discovered a hole in the wall. Even though he was a Tasmanian devil, he could also be sweet-natured.

“He was always happy. He was always smiling. He was so full of energy,” Andrea McVey, Shane’s mother, said. “He’d just run, his long blonde hair would flop around.”

And, his charismatic nature made finding friends easy for Shane.

“He had a determination to help others the most,” Adelson said when reflecting on his friends’ impact on him. “The fact that he was so open to talk about some of the problems he had at times, and to just to see the growth in the past year and a half, it was amazing.”

Outside of school, Shane enjoyed playing video games, skateboarding, and shopping. Because the pandemic quarantine meant that he had more time on his hands, he started to hang out at the gym with his brother, Sean, who is a personal trainer at YouFit.

“I’ve been into working out and into nutrition since high school and started working as a personal trainer at 19,” said Sean McVey. “Around June of last year, I really started helping him when things began to open up again after lockdown and started training him to use certain machines.”

In five months, Shane grew five inches, shooting up from 5’7 to 6’0” tall. Shane was getting leaner and building muscle. Sean felt their friendship rubbing off on him with fitness.

”He was always doing workouts with me and making good changes and doing good things,” said his brother.

On a breezy Tuesday afternoon, Shane volunteered at Feeding South Florida, a local food bank, distributing boxes and giving back during the holiday season. His mother said that Shane was supposed to finish working at 1 p.m., but that he must’ve gotten off earlier than scheduled. He never made it home. The collision occurred at West Park Road and 37th Avenue, a few blocks away from Shane’s elementary school.

To say Shane’s death is a tragedy would be missing the point of his life. He was confidence embodied and he used that to support and build up the people around him. Shane’s memory is something to cherish for years to come. The void his death created has only brought those who knew him best, closer together.

His father says that it’s important to look at the positive side of the situation, no matter how dire.

“You don’t know how you’re going to react to this stuff,” Shane’s father said. “But for me, I just had this overwhelming sense of gratitude.”

The McVey family plans to place a commemorative marker at the site of the accident at a future date.