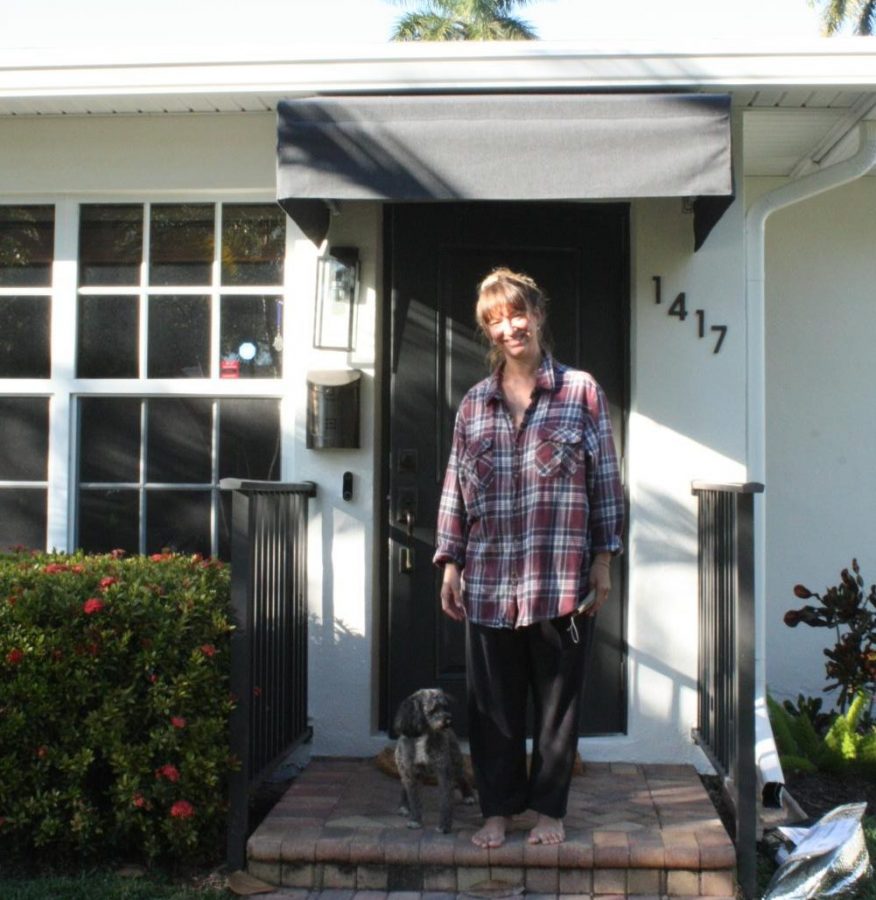 Felipe and his owner, Laura, stand outside their house. Felipe ran away back in December when a house guest left the back door open.

When Laura Remondo came home one day after running errands, to find her dog missing, like any responsible, loving dog owner, she freaked out.

Unlike other dog owners, she called an expert.

No. It’s not Ace Ventura. Her name is Jamie Katz. She is a licensed private investigator who specializes in finding lost and stolen pets, and reuniting them with their owners. She owns the only private investigation agency throughout South Florida.

Remondo found out about Katz through word of mouth, after she had walked around her neighborhood in tears, posting signs and asking neighbors if they saw her beloved fluffy, gray poodle mix, Felipe.

“When I started walking around and asking, a lot of people started telling me about her,” said Remondo.

Katz started by printing out signs for Remondo to put up in the specific locations. So, while Remondo did her part, Katz did hers.

“I like to have the awareness campaign started first,” Katz said. “Which is making them the signs, blasting it on social media, and have the owners get the signs up.”

However, this doesn’t always work. Katz recalls the case of  a run-away dog named Finnegan in a Palm Beach Gardens neighborhood.  Katz started by putting up “missing” signs and posters in the perimeter, but by early afternoon, they were taken down by code enforcement.

“I was trying to figure out how am I going to help these people,” Katz said.

But then, she remembered that the dog’s owners had sent her a video of Finnegan playing the piano.

“I called the news,” Katz said. “They picked up the story instantly.”

Soon enough, Finnegan was all over the news, playing the piano worldwide. Even so, they received no calls reporting the lost dog. It was time to let her own dogs out, her two tracking dogs — Gable and Fletcher. Her Brittany Spaniel and Terrier Mix are usually her second resort when things don’t go as planned. They’re scent specific tracking dogs, so they can track down a pair of socks from miles away, without getting distracted.

Katz has been successfully finding and saving hundreds of lost pets, from dogs and cats to ferrets and tortoises in South Florida since 2014. She says out of 700 cases, she has a 67% successful reunification rate. Her charge for off-location prices are usually $495, where she puts up signs and gets the news around. On-location usually varies from $900-$1000, where she brings out her tracking dogs.

Katz got the idea to start her agency, after her friend had lost her cat, and they both found an ad about a private investigator who used tracking dogs to find lost pets and animals.

But they waited for them to show up for three days, but the agency never did.

“I got scammed.” said Katz.

She had already been interning as a PI for people, but after this situation, she just knew she wanted to pursue a career as an animal PI. She liked the idea of helping other people, such as Remondo, to find their lost companions.

Thanks to Katz’s posters, a small group of kids recognized Felipe when the dog showed up at their soccer practice. His family was so relieved to have him back after being missing for several day.

“It’s just an amazing feeling,” Katz said. “You just help that family go back to normal.”