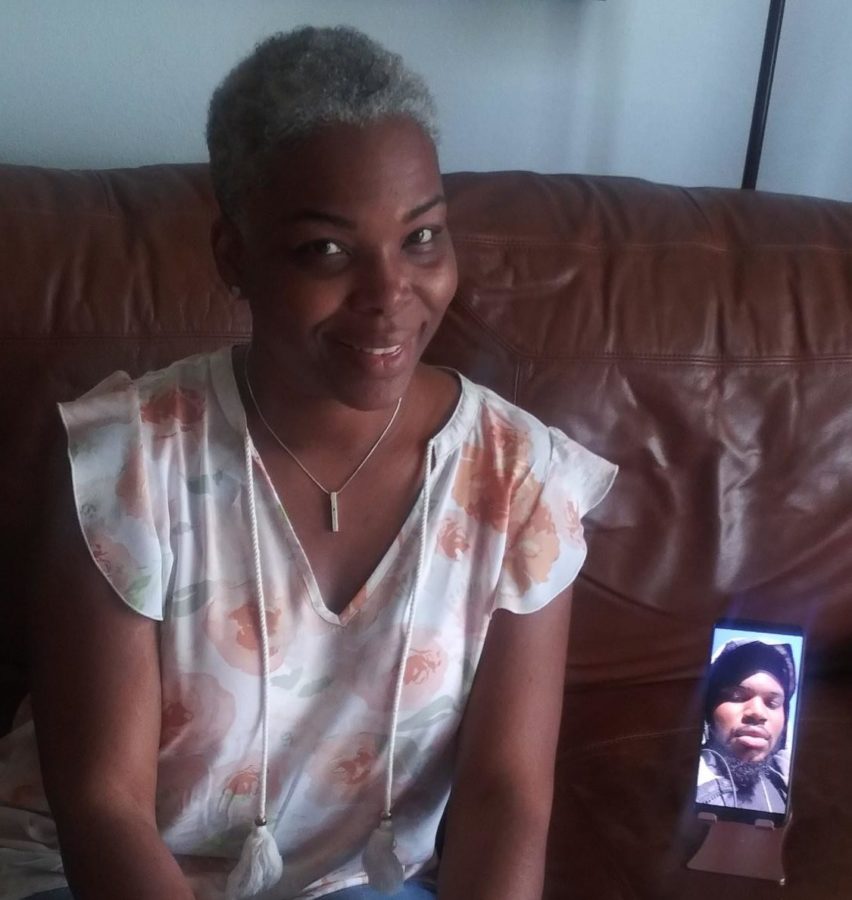 Simone Knight sits next to a picture of her son, Cory Pannell.

Simone Knight and Her Son, Cory Pannell React to ‘Montero”

Childish Gambino’s “This is America”, Billie Eilish’s “All the Good Girls Go to Hell”, and Cardi B’s “WAP” were all controversial music videos. All of these artists tried to top one another with a shocking video. But, none of them simulated intimate relations with the Devil. Until now. With Lil Nas X’s release of “Montero”. Out of those that were revolted from the video include mother and son Simone Knight and Cory Pannell. From Lil Nas dropping down a pole to h double hockey sticks, to giving the devil a lap dance,  his artistic portrayal outraged both parents, and conservatives alike.

Like most parents, Simone Knight, 47, couldn’t even finish the video.

“I had already made up in my mind. I was not going to watch the video, based on what I’ve heard,” said Simone.

But, she did. And when she saw all that she could stomach, she just shook her head and whispered: “Oh my gosh.”

“And now that I watched it, I’m glad I made that decision not to,” Simone said.

On the other hand, it doesn’t seem to bother millennials, like Cory Pannell, 25.

After finishing the whole video, Pannell simply described the video as awkward.

“I could not find myself watching it in a group of people, it was just awkward for me to watch,” he said.

With both Pannell and Knight coming to an understanding of what Lil Nas was trying to portray, may there have been another message?

“He’s somebody that lives in lust and somebody who’s trying to really change the stigma of who he is and what he is, but I don’t think he’s just doing this for himself.” Cory said.

Although many viewers were vexed by the video and believed the video should have been censored due to it’s raunchy lyrics and video elements, Simone believes it’s no different than what we see today.

“I think it’s not far off from a lot of other things that we are seeing, you know, when you go on Netflix, or when you go on Amazon prime; I just think it’s the storyline behind the video where everyone is just up in arms” Simone said.

On the other hand, some younger viewers embraced the concept and believed it was an artistically interpretive video that shouldn’t be censored. Look no further than to the thousands of positive comments  supporting the video most of which were apparently young kids.

“No, art is art and no matter how it was represented, if you try to censor art, then you end up censoring people,” Pannell said.

With a multitude of Lil Nas X’s viewers being youngsters, Some may see the video as highly inappropriate for anyone 16 or younger. With being a mother of four, she believes it’s important to be aware of what kids are watching.

“So at the end of the day,  we have to be responsible as parents to determine what our kids are going to watch. But it could influence them if they see it just like all the other things that are out there designed to influence children to go in a certain direction,” Simone said.

At the end of the day, no matter the absurdity of the Montero and any videos alike, there is always something as a community we can see that needs to be addressed.

“The only topic I again can think to touch up on is responsibility and accountability from the parents and the guardians, because I will not infringe on an artist’s right to do art.” Cory said.