With Biden Arms Deal, the US is Supporting Isreal in Latest Attack 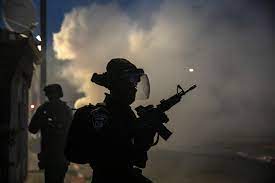 The Israeli-Palestinian conflict is a feud between two nations that has rooted itself in both countries many years ago but is now gaining a lot of attention that is raising public awareness, and, in turn, activism. The social movement aims to send support and love to Palestine during what is seemingly a one-sided brutal beat down of their people by Israeli forces.

For context on the situation, the conflict is the product of two opposing interest groups: the Jewish Zionist project and the Palestinian nationalist project. At its very core, the debacle is a debate over territory. Palestinian people come from a land that Israel currently owns, and therefore they are at arms trying to keep their home as their own country. This all started in the early 20th century with the migration of millions of Jews to Palestine, a then mostly Muslim and Arabic land. Today’s borders are the product of two wars fought between the 2 groups in 1967 and 1948.

The world views Israel as a fellow country, but does not agree with it for the most part. It is morally wrong for any group of people to invade another group’s land and basically steal all that is theirs. For example, it would be immensely frightening and unjust to have a way stronger Canada attack us in pursuit of territorial expansion. The amount of blood that would be shed would be felt all around the country, as we would retaliate but ultimately be crushed and oppressed. Racism and discrimination are very much real even today, and to Palestinians, it most likely is what they are treated with.

Being the self-proclaimed elder brother of the rest of the world and a neutral figure in world affairs, one would expect the United States of America (USA) to speak up or step into the incident and put a halt to it. The American people sure thought that would be the case, but the USA decided to go a completely unpredictable route. President Biden’s administration has recently approved a weapons sale worth a whopping sum of $735 million to Israel, effectively fueling their military to continue their cruelty towards the Palestinians.

In my opinion, the arms deal was a senseless sale of weapons that should not have even been considered by the USA. Our country should have remained neutral to the conflict, if not having helped the Palestinian people. The Biden administration has bloody hands now. We haven’t seen the full range of the possible havoc Israel is ready to unleash unto Palestine. One may argue that the United States remained neutral and only took part in nothing more than a simple sale, but the truth is that funding the clearly stronger and more abusive side is morally incorrect. Palestine needs more support than ever now because they could be on the brink of being wiped out in the next couple of years.

This is no longer a political feud for land between two groups. This is a humanitarian crisis our country has chosen to make worse.