Sugar, Spice and Everything But Nice 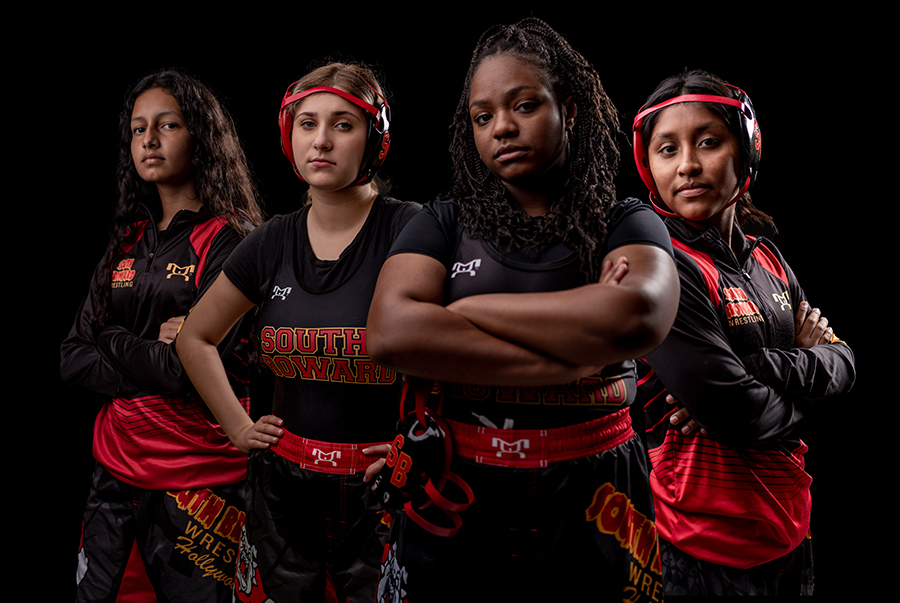 SBHS sophomore Hannah Olstein is sweet. She’ll open the door for you, lend you a pencil or try to bring you up if you’re feeling down. But don’t let the long blond hair, big blue eyes, sweet voice and kind demeanor fool you. She’ll pin you to the ground in a flash if you give her the chance.

Olstein is one of four female wrestlers at South Broward High School. So far, she has wrestled in more than 12 matches this season alone, including six tournaments. She knows people perceive her as soft and sweet, so to be effective, she trades her doll face for her game face.

“Any time in a tournament the first thing I hear is ‘Wow. She looks tough’,” she said. “Mental intimidation is everything. I just turn my emotions off. I don’t look at anyone. I keep to myself. If I’m with my team I’m going to start laughing and that’s not really scary.”

And she’s not the only SBHS female who will gator-roll you on the mat. There are three more: Nicole Arroyo, Veronic Dorsin and Lucia Cantillano. Together they make up the roster of South Broward’s first ever girl’s wrestling team.

For years girls have had the opportunity to wrestle in Florida, but not many traded their cheerleading outfits for singlets. The four girls who make up the team joined for different reasons. Olstein joined because it was the only sport available.

“My family had experienced COVID, and by that time no other sports were available, and it was the only one I could choose,” said Olstein, who is also team captain.

A friend of Dorsin convinced her to go to a practice. The friend left, but Dorsin stayed.

“She ditched me, but everyone there was nice, so I stayed,” she said.

For Arroyo it was the opposite. She brought a friend along and they both stayed.

“Nicole was like we should do wrestling, so I decided to join, and it was pretty cool,” said Cantillano.

“[It’s] not as common as it should be. There are probably less than 30 girls [wrestlers]  in Broward County,”  said Major.

SBS isn’t the only high school that has a girls wrestling team. Western and Cypress Bay high schools also have their own set of girls wrestlers. Outside of Broward County there are countless other full female wrestler teams with their own unique rosters.

In the past, female wrestlers have had to face off against male wrestlers in official tournaments, or wrestle in third-party tournaments not officially sanctioned by the Florida High School Athletic Association (FHAA). But the sport is growing in popularity among girls, so now more girls are wrestling female opponents. Although the SBHS girls team practice against boys to sharpen their skills, none have wrestled a boy in competition. Except Olstein. She had the chance to face a boy in a tournament at Cardinal Gibbons High School this season.

“When I first saw him he looked young,” said Olstein. “I knew that he definitely was a middle schooler, but even then some middle schoolers are stronger than me.”

She saw that he was about the same height and similar stature as her. Both opponents, male and female, were trying to intimidate each other.

In wrestling a leg shot is when the wrestler ducks under at thigh level, grabs from behind the knee, and tries to take one’s opponent down. It’s a risky move that proves to be high-risk high-reward value. Only when you are absolutely confident will you execute this move.

Olstein hadn’t done a leg shot in a match-until that day. It turned out to be her confidence builder.

“Once I went for that leg shot, I was like, ‘Oh, he’s not so scary,” “This is way easier than I thought,” said Olstein.

The two evenly matched wrestlers grappled while earning points through takedowns. The match went into overtime where Olstein got a decisive victory, 5-4, over her opponent. She was ecstatic when the referee raised her hand.

“After, I looked at the scoreboard and I was like: Oh my God. I actually won this,” she said. “It’s pure happiness knowing that you worked this hard and you did it.”

For her opponent it was a different story. She looked over to see a slumped back.

“He kind of felt sad. It doesn’t feel good to be beaten by a girl, but you still get respect by the stands,” said Olstein.

And, she wasn’t the only SBHS female wrestler to achieve a milestone for the sport at the school. After winning her regional match, Dorsin qualified for the state tournament.

“I couldn’t believe I made it,” said Dorsin. “When I got there it didn’t feel like I was there.”

The tournament was held at the Silver Spurs Arena in Kissimmee, which was the first ever FHAA sanctioned girls wrestling tournament. Female wrestlers from all over the state came to challenge each other for titles. Though the tournament ended in defeat for Dorsin, the experience alone was a victory.

“I think she did well, considering this was her first year,” said Major. “If managed and coached properly, it can help the sport grow, which it needs, as athletes might not choose wrestling as freshman.”

Beginning this year, girls wrestling will become more of an option. Starting in the 2021-2022 school year, the FHAA decided to officially sanction female wrestling as its own division. With this new addition to the FHAA’s sport roster, female wrestlers are now able to compete against one another in the official high school setting.

Even with all of the success this year, it’s hard to get girls interested in the sport. For one thing, people have mixed reactions at the news that these girls wrestle. For Dorsin a reaction she’s often gotten is: “Are you sure you want to wrestle?” There’s also Arroyo who says “people are surprised.” Since the sport is viewed as so masculine, most girls think of cheerleading and volleyball and not a sport that has a lot of contact. Dorsin is considering cheerleading for next year, and Cantillano, who dropped out of sight after an injury,  is on the fence too.

“It will be an uphill battle because the girls aren’t expected or sometimes discouraged to participate in combat sports,” said Major.

But, that isn’t stopping Major or Olstein. Whether it’s by trying to convince their athletic friends or donning a t-shirt and hosting a booth at a school event, they have been recruiting new members for the wrestling team throughout the year.

“There was an open house for eighth graders a couple of months ago that are coming into ninth grade and maybe when they come into school next year, they’ll want to do it,” said Olstein. “The majority of them thought it was pretty cool and wanted to try it out.”

Still, Olstein admits it’s difficult because many of the female athletes are already committed to other sports.

“It gets hard because there are certain sports my friends are committed to that interfere with our season, and I don’t want to take them away from the sport that they are good at,” she said.

And of course, there’s the stigma of wrestlers being not only unfeminine, but also unattractive. She points to the bruises on her body and says that on practice days, she doesn’t bother doing her hair and make-up.

“A lot of wrestlers are known for being ugly, it’s not really what attracts people to a sport,” said Olstein.

But, the SBHS female wrestlers haven’t let these words get to their heads. The word that is in their heads? Winning. And in a sport where intimidation is everything, hair and make-up is the least of your worries.

“If you’re going head to head with somebody, you’re not gonna show up with a pretty face,” said Olstein.